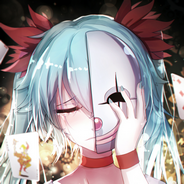 Bonjour tout le monde !
My turn to introduce myself
* Psst * check OVERWERK while you're reading this :

~~Taking a deep breath~~
I'm Yume / YumeGami / Shini / ShiniRC / ShiniRC38 (yes, i've been playing many different games)
I'll just stick to Yume/ShiniRC for PS2 (if there is a way to change nick in PS2 please tell me

Only 1 character, main "Combat" Medic, Infantry over everything, No shame Run & Shoot & Die type of player.

~~Sitting on a sofa, opening the photo album on his lap~~
I started playing PS2 with friends and family members, grew up a bit in the game together and completely stopped playing. I've been back in PS2 once or twice since the last 5 years but always alone, and not for long.
Now i'm looking forward more teamplay and after joining Davelantor's open platoon twice, decided to apply to EDIM last week (or so).

* Sigh *
~~A drink in his hand, looking deep into the horizon of a setting sun (or trying to imagine it, because he's looking directly at a tree)~~
I want to progress, discover more things, tips&tricks, infos, ways to enjoy that huge game, while having nice comrades on my side to share things with.

I'll be the Medic who will run the entire map just to resurrect you (if I'm not shot down in the meantime)
~~Raising his fist to his chest~~
I'll be the Medic who does not forget to throw his Revive Grenade (even if you're the only one dead, gotta grind that Rez HARD)
~~Start looking at the sky~~
I'll follow the rules and orders (because I like that type of play... #NoSM)
I'll-
~~Tears are going up~~
I'll be the goodest boye
~~Falling back, he was having a heart attack all along~~

Baguette blood in my veins (it can explain the mistakes i could have made in this post), i'm different on vocal from what you can read here (i'll thank my imagination) : more shy/calm, bad english speaker, bad french accent and not laughing that much, but I to speak out more and more everytime.
"Kind" of nature, I never shout or get angry at anything/anyone. Empathy is something i've learn and live with.
You'll often see me on TS3 and IG (I still have a job, so not all day long)

I love music among everything
I watched a lot of anime (and read a lot of mangas, stopped for weeb reasons)
I browsed a lot of memes (and stopped, way too mainstream to be what it was at the beginning)
I played a lot of games (PC : Smite, AVA, Warframe, osu!, NFS, Blade'n'Soul /// Was raised with Nintendo)
I spent way too much time on the internet (forums, gaming communities, clans, etc)
I didn't spent enough time on my bike (I want to ride more, with more people)
Now i'm getting back to PlanetSide 2, how don't know for how long but I'm delighted to be part of Emerald Immersion with you guys ♥

Question box is open below, point any mistake I could have made or just ask me how many cats do I have (don't ask that, I have 5 cats)
Cheers, Cya In Game
For Vanu

Jfc.... now I feel like I need to rewrite my Introduction!

Let's see if we can make you stay longer (but to agree I want since a few year use my bike again as well... Let's to push us?

)
Welcome and nice to have you here!
Top

I'm used to write on forums, something i got from older gaming communities and forums (it's waaay easier in French for me, i hope i'll get used to it in English ^^) but it's "chronophage" (like we say in french... "time-consuming" is uglier imo... i could say "chronophageous" for a false
translation)

Haha it's not that bad, as long as they understand what you're saying, French people ("normal" ones) will not get offended or mock you out... since many of them don't do better than you

See ? Not that bad, mainly orthography and conjugations problems but that's all ^^
PS : i'm a cheater, I use google translate everytime I have a doubt while typing my sentences

This is when I thought about the "imparfait" xD I wanted to take a past but which.... and I decided somehow for the imparfait

I looked rn for it in wikipedia and I think I know why it should be Passé composé but thinking about it Imperfait wouldn't be wrong... for me it would depend on the point of view xD

is croire like -s, -s, -x in singular? I really forgot that :S mixed it probably with something else

I looked rn for it in wikipedia and I think I know why it should be Passé composé but thinking about it Imperfait wouldn't be wrong... for me it would depend on the point of view xD

Imparfait and passé composé can be used to replace each other, without changing the sentence meaning, French are just used to hear one or the other in certain situations, or to put an accent on certain details in the sentence

There is a difference between "peux" (from pouvoir) and "peu" (which mean few), here "peu de" was for "few of", it was just a orthography mistake ("peu" is an "invariable")


This post is tranforming into a "Cours de français" XD
But that isn't bad, gets me to learn things back (yeah, as every french, conjugations are forgotten for years, we need to learn them back from the web)